How Banks Should Scale Their Digital Efforts

Banks, most especially mid-sized banks, face a unique predicament. While a consensus has formed within the industry that software in the future will become a or the key differentiating factor for finance institutions, many of banks lack either the relevant human capital or the financial resources to scale their digital efforts to match consumer demands. Banks can of course outsource their digitalization to vendors; however, this poses challenges of its own. Namely, software created by vendors by its very nature is likely not to provide the unique, differentiating features needed for a true competitive advantage. Furthermore, outsourced software development raises the risk of vendor lock-in. Likewise, mergers and acquisitions may at first glance appear to be an ample solution, but integrating different tech can bring its own steep difficulties. And yet with software's importance gaining steam, now is the time for banks to decide and act on a thorough strategy to scale their digitalization.

Already, some important areas are beyond the reach of some mid-sized banks. As these banks attempt to gain entrance into realms such as consumer payments or online deposit gathering, they are often relying on vendors for the requisite technological capabilities. These vendors may not offer the same consistent quality, and, even if they do, these provided capabilities are in their nature not unique enough able to differentiate banks from their competitors.

However, even as mid-cap banks face certain challenges in scaling their technological endeavors, in some sectors they have factors working in their favor. For example, over time as technologies proliferate and become better developed, they will also likely become cheaper. Likewise, aspects of the industry are built on personal relationships that cannot so easily be replaced by software.

While digitalization is a challenge in and of itself, scaling digitalization is something of a herculean task. Any digital project is fraught with security risks. Digital strategy should be fully incorporated into a company's strategy, so let's discuss how banks can best strategize their digital initiatives to scale.

Before beginning to allocate limited resources, banks need to assess what areas are of the greatest strategic importance. All too often, IT investments aren't aligned with the strategic priorities of the company. Rather than building up new, differentiating features, the vast majority of developer hours are dedicated to maintenance of code. Merely treading water will lose you the race.

While a digital boardroom won't create your IT strategy for you, it can help to align and integrate your IT department with corporate strategy and other business departments. A digital boardroom provides transparency into how IT resources are being spent, using KPIs and visualizations. Through this, executives can maintain oversight of their IT departments without necessarily having a background in tech. While digital boardrooms are very useful, they're just one part of the larger software process mining technology, which can help to make software development at least 30% more efficient. 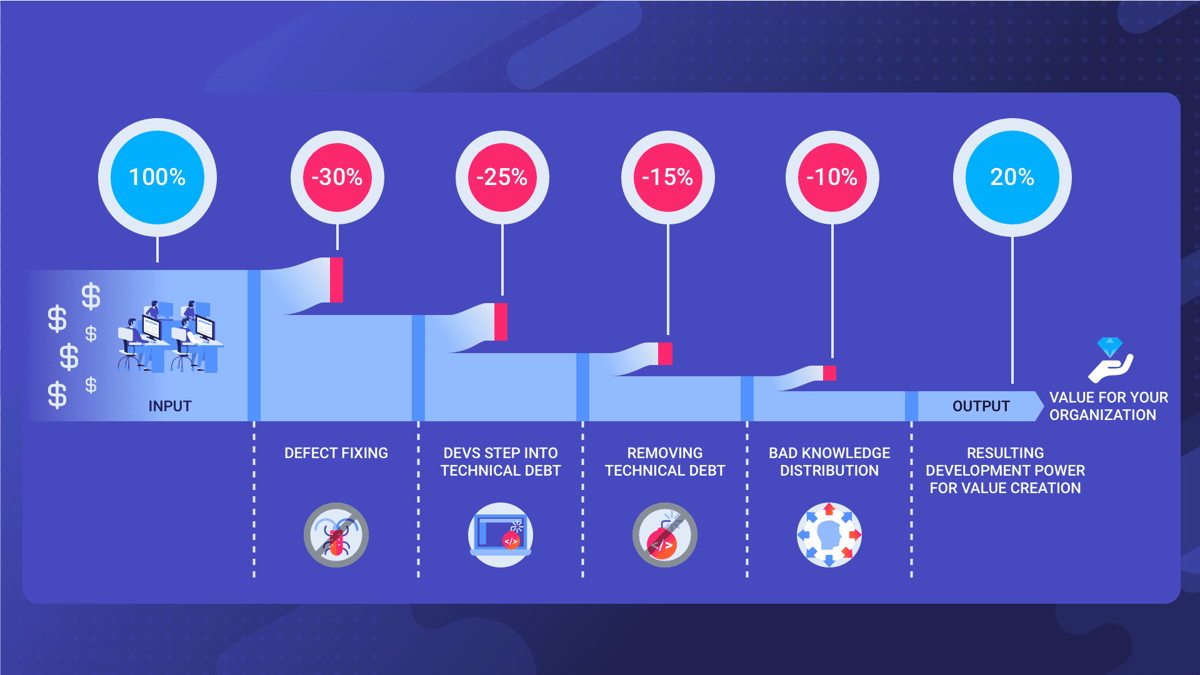 Another aspect to consider when forming a digital strategy is the approach one takes toward digital initiatives. A business-as-usual approach treats digital as another project to be helmed by one or two executives and their teams. This can enable smaller initiatives to be executed quickly; however, it's ill suited to bring about the long-lasting digital transformation so many financial institutions need. Nor is it particularly likely to create the company-wide buy-in necessary for many such projects to be successfully adopted.

The so-called digital native approach has the highest contrast to that of the aforementioned. Rather than merely dedicating a team, a digital native model involves creating a separate business unit with its own KPIs, profit and loss, and using this business unit to drive meaningful change within the bank and tap untouched markets.

Too many banks are burdened by legacy systems that drain software developer resources away from strategically important projects. So rather than developing new features to attract customers or cut costs, the IT budget is squandered maintaining heritage systems often written in code languages so old that they are no longer taught at universities.  For medium and small sized banks, their key advantage is in their agility – their ability to be nimble and adapt more quickly to changes in the economy and customer expectations. However, far too many squander this advantage by being slow to adopt new technologies, such as entering the cloud. For this, software process mining can also be of help.

While hardly an argument must be made in favor of banks digitalizing, the critical question remains "how?" Especially for mid-cap and smaller banks, resources are scarce and yet that same need to digitalize exists. Otherwise, in the near future, they may be disrupted by digital natives providing superior unique experiences or by large banks who can afford to scale their digital ventures.

Given the restraints, banks need to ensure that the digital investments are focused truly on those areas most strategically important and most likely to provide a sustainable competitive advantage. Especially medium to small sized banks need to utilize their natural advantage of being more nimble so that they can continue to compete against both their larger competitors as well as new digitally native market entrants. Software production and various digital initiatives can be made more efficient and more easily scaled by leveraging software process mining.